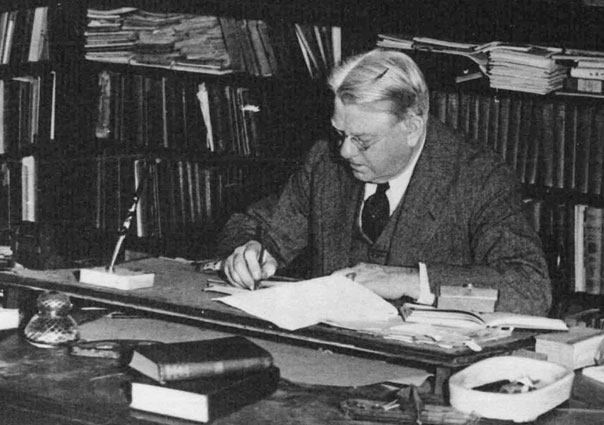 When I read this Designer Spotlight on type designer Frederic Goudy it made me remember again just how much I like him. It’s not because he made great type — he did, with well over 100 typefaces to his name including Goudy Old Style. And it’s not because this made him more prolific than most of his contemporaries and the third most prolific type designer in American history.

Those things are more than enough to make me like the guy, but what made me a Goudy superfan is that he did all this and more after he was 40 years old. Before that he busied himself keeping books for a realtor in Chicago.

He didn’t start making type seriously until after he was 40, and despite being a lover of lettering and appreciator of type, was pretty new to the craft of actually making type. As Popular Science put it in this 1942 article:

During the next 36 years, starting almost from scratch at an age when most men are permanently set in their chosen vocations, he cut 113 fonts of type, thereby creating more usable faces than did the seven greatest inventors of type and books, from Gutenberg to Garamond.

Whenever I hear people talking about it being too late to learn a new skill, or when I feel like something might be out of reach for me, I think of what Goudy accomplished “when most men are permanently set in their chosen vocations.” I admire the hell out of that and am constantly inspired by it whenever I’m reminded of him.

There’s a great silent short film from the 1930s called The Creation of a Printing Type from the Design to The Print that shows Goudy doing what it says on the tin. I can’t find it online anymore, but it is included on the DVD of the also excellent Making Faces documentary on Jim Rimmer.

For more on Goudy, Luc Devroye’s biography page or this short piece on process and criticism by Steven Heller are good places to start, or pick up most any book on type history.