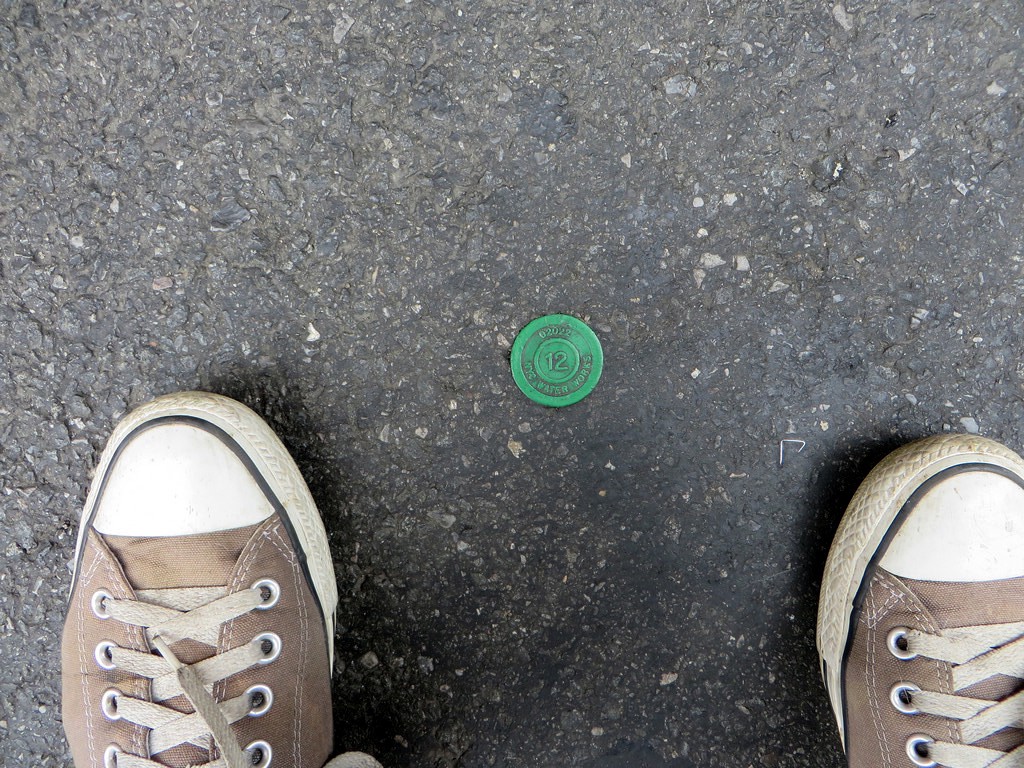 When I first moved to New York, I remember seeing these little poker chip things in the street and wondering just what the heck they were. At the time, I thought they were some sort of street art, like Toynbee tiles. It turns out they are pieces of a larger communication system, as Paul Lukas writes in “The Street’s Secret Code”:

These markers are called A-tags (short for asphalt tags). They’re more commonly used in other municipalities as “Call Before You Dig” warning markers, but in New York they’ve been adapted to create a recordkeeping and accountability system. When a utility or contractor is issued a permit to excavate a hole or trench in the roadway — something that happens about 280,000 times a year in New York — the asphalt patch that’s applied at the end of the job must include an embedded A-tag. Each tag has three anchor legs, which, along with a bit of epoxy, help keep the tag in place. The number at the center of the tag indicates the year of the job (“12” for 2012, “14” for 2014, etc.), each broad contracting category has its own color, and each individual contractor or utility is identified either by name or by a unique five-digit number.

So simple and useful. What’s more, they’re an iteration of a previous attempt at the same:

“Before the A-tags, we used painted marks,” says Joseph Yacca, Director of Operations for the New York City Department of Transportation, who helped initiate New York’s A-tag program in 2006. “But the painted marks were just color-coded — they didn’t identify the individual user. For example, every plumber was green, so if you found a green marker, you knew you were looking for a plumber, but you didn’t know who. So we used to have to pull all the old permits and so on. Now we can pinpoint it much faster.”

I love how small ideas like this can organize huge systems such as a city like New York.